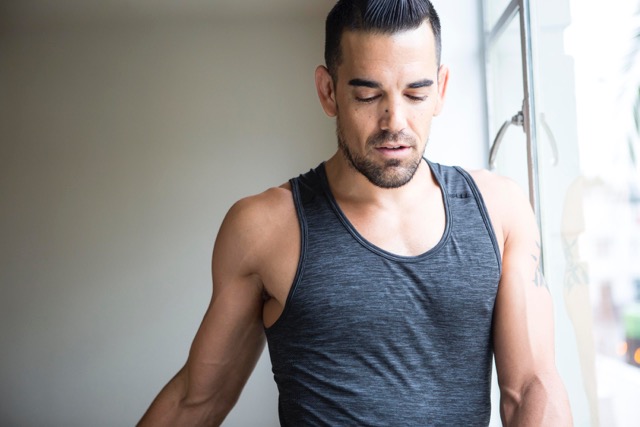 How many of our female members have begged their partner, a family member or a male friend to come to a yoga class, only to be met with resistance and opposition? Myths and stereotypes surrounding yoga are a major demotivator for men. Yoga is often (wrongly!) viewed as being too feminine, too soft, too hippy or too New Age – not a ‘real’ workout. What many men don’t realise is that yoga can be just as intense exercise as weights or cardio. Yoga allows you to hone your mental focus, rid your body of toxins, and boost your physical performance. The hardest part for most men is challenging the misconceptions and taking the leap to merely try out a class.

Yoga teacher and Warrior One founder, Dustin, was once one of the aforementioned males. A keen surfer from the age of 3, Dustin has always had a passion for sports and lives an extremely active lifestyle. A skateboarding accident in LA when he was 23 led to the shattering of his tibia and fibula, with doctors believing he would never walk again. Ignoring his prognosis and a long rehab program not only allowed Dustin to regain strength in his legs, but also to move away from negative life influences- taking him all the way to Australia to pursue a professional surfing career. He was soon after introduced to Brazilian Jiu-Jitsu, his true passion. Countless medals, world titles and the prestigious black belt followed.

Dustin’s passion for yoga came after I fell in love with the practice and begged him to try it too. Does this part of the story sound familiar to any female yogis and their partners? Of course I knew it would complement his Jiu-Jitsu and surfing, but Dustin was still resistant – mainly due to the stereotypes mentioned earlier- yoga was too easy, too feminine, too spiritual. He eventually came around and went to a class with me, needless to say his obsession was born! The athlete in him recognised the enormous physical and mental challenge that yoga truly is, and he set an intention of practicing for 60 days straight (which turned into 6 years straight and counting!). We make the effort to get on the mat together most days. Amazingly, Dustin is just about to complete his fourth yoga teacher training in April – Acro Vinyasa.

Men who are used to a rigorous exercise routine should know that yoga can both complement, and be just as physically challenging as their usual activities. Yoga also helps relieve the stress that often accompanies demanding workouts and increases flexibility, which helps to prevent further injuries. The intention in yoga is all about the connection between mind and body, rather than focusing solely on physical performance.

Yoga teaches you to define success in terms of self-mastery. Switching the focus to what you can achieve, rather than the expectations of others, is beneficial in so many areas of our lives. The mental clarity and power to push past your own limits that comes from a regular practice not only encourages peak performance, but also relieves the pressure that comes from trying to live up to unrealistic expectations. Spending just one hour on the mat can make the world of difference to your mood; enhancing your ability to enjoy life, work productively and to be more present in your relationships. Dustin and I owe our personal thanks to yoga, believing it to be a big contributor to the love and connection we have continuously shared with each other over the past decade.

At the end of the day, your yoga practice can be anything you want it to be. There are so many styles to try – it can be heated, restorative, slow, adrenalin-fuelled, gentle, strength based – just to name a few! We challenge any man to push his body and mind with one of our yoga classes – your mat is waiting!